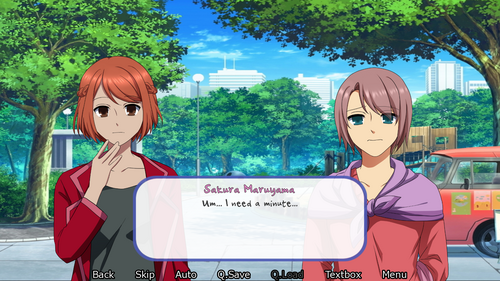 It's been a long time since the last update, but v8 is finally here! The main focus this time is the addition of more side stories, showing relationships between existing characters while also introducing the new character Sakura. There's also a bonus mode that behaves like a simplified dating sim, which allows the player to set up scenarios about their favorite pairings.

That's all for this update. I hope people continue to enjoy the game!

I may need a little more context to answer that. Where did you see the name Kyoko?

She is an optional choice in the dating sim part but her only partner option is Orino. I didn't see her anywhere else in the whole game so I'm wondering if she and Orino will have a future side story.

I see... I thought I had managed to remove her content from the public build, but I must have missed a step. The short explanation is that Kyoko's story was pushed to v9, and I planned to introduce her to Sim Akiramine in that version as well. As you suspected, that upcoming story is planned to focus on Kyoko and Orino.

(As for her inclusion in Sim Akiramine, Kyoko doesn't have anyone other than Orino as an option because I felt like the age gap between her and the rest of the cast would make most of the potential pairings difficult to believe. For some additional context, Kyoko actually originated in another of my stories from this setting, and her adopted daughters are about the same age as the main cast of this game.)

Hopefully that clarifies things a bit, but let me know if there is anything else that could use explaining. I hope that Kyoko's bonus content slipping through to the public build wasn't too confusing.