A downloadable visual novel for Windows, macOS, Linux, and Android

Solana Academy is a prestigious all-girl boarding school in a remote corner of Japan. Despite its distance from major cities, it never wants for students or funding.

However, the ideal school life at Solana Academy is disrupted by the sudden appearance of grotesque monsters from the formerly sealed-off old dormitory. A chance discovery of magical “petals” leaves four students as the only line of defense against this threat. But as the girls investigate the old dormitory for a way to be rid of the monsters, they begin to uncover a sinister truth regarding their school…

This story is continued in Eldritch University.

A first-year at Solana Academy that has few friends due to her abrasive and standoffish personality. She tends to discount the worth of others, assuming herself to be smarter or more knowledgeable. Bad experiences in the past have turned Yue away from looking for friends and made her wary of "nerdy" activities like cosplay.

Akomi is known for two things: enjoying food and making perverted comments. She seems to be able to make a lewd joke from just about anything, even making attempts when the result isn't particularly funny. While she rarely ventures into outright harassment, Akomi is still avoided by most other first-years.

Some of the other first-years at Solana Academy assume Cho is a tomboy because she wears the uniform pants, not realizing that she converted most of her skirts into costume parts. Cho has a fairly naive view on how people should behave, which can cause friction with more cynical or realist classmates like Yue.

A first-year student that often wears a scarf, even when it isn’t cold. Kagami is usually quiet, and when she does talk she tends to use formal address and a carefully selected vocabulary. Because of the otherwise relaxed environment at Solana Academy, other students can find Kagami's formality uncomfortable.

A first-year student at Solana Academy that prefers spending time with her friends to studying. She has a reputation for being an airhead, as her lack of focus often leaves her falling behind in class and ignoring social cues. She spends a lot of time with Yue, to the latter's annoyance.

A second-year at Solana Academy. Misaki has known Kasumi for years, and they have recently begun dating. She is outgoing and friendly, always looking for new friends.

An instructor at Solana Academy. While young, she is a competent teacher and does her best to make sure her students do well in their classes. Outside of teaching, she has a lot less experience.

The school nurse at Solana Academy. While she acts cold and cynical, she doesn’t hesitate to help students that come to her for treatment. She is a lot younger than her personality would suggest.

In order to download this visual novel you must purchase it at or above the minimum price of $12 USD. You will get access to the following files: 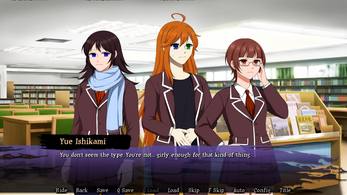 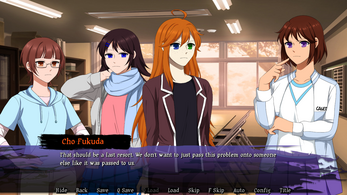 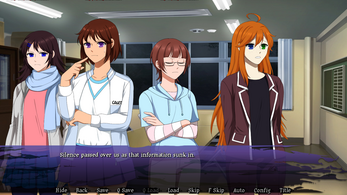 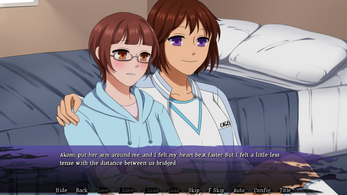 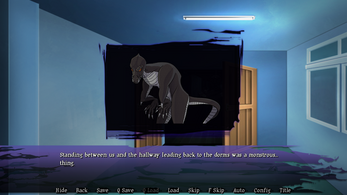